Colonial Pipeline Company continues environmental remediation and product recovery activities at the site of an August release from the pipeline outside of Huntersville, North Carolina, in close coordination with the North Carolina Department of Environmental Quality (NCDEQ) and Mecklenburg County.

Test samples are collected by third-party consultants and then submitted for analysis under chain of custody to an NCDEQ certified third-party analytical laboratory. The results are then shared with residents and with NCDEQ.  No petroleum constituents have been detected in any of those samples.

Although there is no evidence to suggest that the product has migrated from the general vicinity of the release, at the request of local officials and in consultation with NCDEQ, Colonial will conduct additional biannual testing of water supply wells that are located between 1,500 and 2,000 feet from the release point. This expanded program will involve seven additional water supply wells, two of which are not currently in use, one which is used for irrigation purposes and four that are used for potable water needs. These four potable water supply wells were sampled as part of Colonial’s initial response, and no petroleum constituents were detected in those samples. The following illustration provides an overview of Colonial’s water supply well sampling efforts: 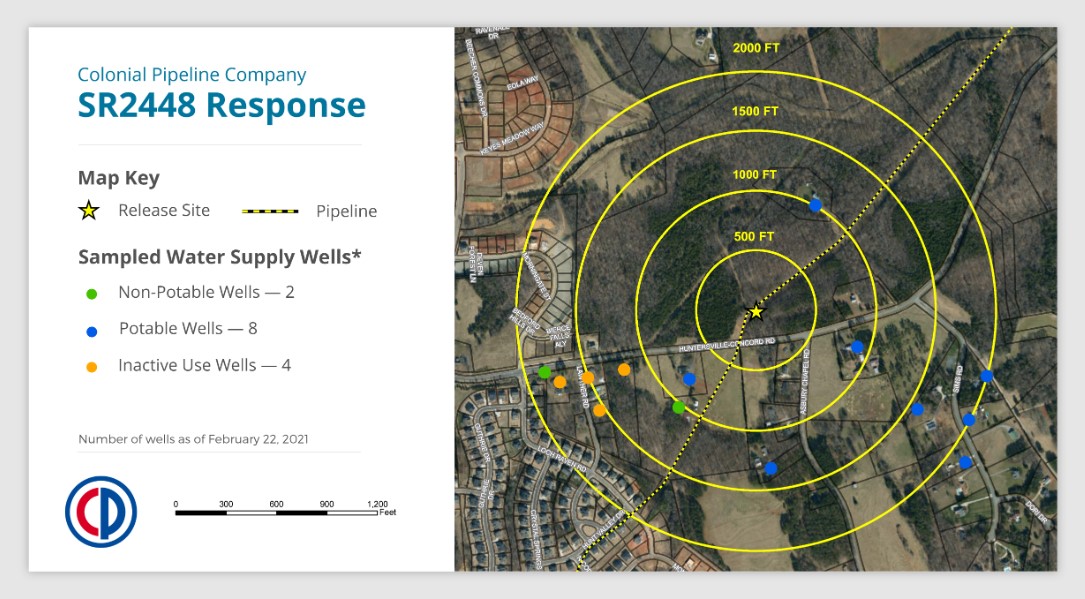 Colonial remains committed to regaining the trust of our neighbors who have been affected by this event.  In a recent tour of the area conducted for officials with Mecklenburg County, Colonial reemphasized its commitment to restoring the natural environment, and meeting or exceeding all regulatory requirements.  We will continue to work with local partners to remediate the Oehler Nature Preserve, and we will expand area partnerships as part of our ongoing Environmental Partners Program.

Colonial Pipeline appreciated the opportunity to provide an update on our recovery and remediation activities during the Huntersville Board of Commissioners’ meeting last night. We remain committed to regaining the trust of this community, where we have been operating for more than 50 years, and to keeping our neighbors informed.

As we shared during the meeting, Colonial relies on a number of systems and processes to identify a potential release, including in-line inspections, operational monitoring, aerial patrols, and community awareness. The technology we use to monitor our mainline pipelines, Supervisory Control and Data Acquisition or SCADA, is routinely updated. The system, which meets all regulatory requirements, underwent a full upgrade in 2018.

Federal regulations require that pipeline right-of-ways (ROW) be visually inspected 26 times per year. Colonial performs aerial patrols of our mainlines at least once a week – far exceeding federal regulation. In Huntersville, we performed an aerial patrol on August 12, just two days before the release was discovered. At the time of this patrol, there were no indications of a release – no signs of dead vegetation or product on the ROW.

An ongoing investigation of subsurface geological conditions has helped provide more information on what is happening underground at the release site. The location of the release is at the highest elevation point in the vicinity, which we believe resulted in a flow of released product downward and then outward from the release point, which was on the bottom of the pipe. Based on this hydrogeological information and the location of the crack on the pipe, we believe the product may have flowed into the subsurface for a period of time, measured in days or weeks, before reaching the surface.

We have also reviewed a significant amount of operational data from the days and weeks before the release was discovered. Based on that information, we believe this release occurred at a rate less than what SCADA technology can detect.

To date, Colonial has installed 137 wells to support environmental remediation, including 81 monitoring and 56 recovery wells at the release location. As of January 30, Colonial had recovered approximately 17,615 barrels of product. We have continued to conduct weekly tests of water supply wells for homes within the 1,500-foot monitoring radius established by NCDEQ. These tests are performed by third-party consultants and submitted under chain of custody to NCDEQ certified third-party labs. The results are also shared with the NCDEQ.

No petroleum constituents have been detected in any of those tests. We have provided those homeowners with the opportunity to convert from well water to public water supplies, at no cost to the homeowners. That offer remains open to any homeowners in the 1,500-foot radius.

We also recently reopened traffic along Huntersville-Concord Road and have worked with local businesses and contractors to install landscaping to enhance the visual appearance of the area and to minimize disruptions to our neighbors.

We will continue to update the public through this website as new information becomes available.

For a video of our response overview, click here.

Local residents, media and other interested stakeholders can contact Colonial Pipeline by clicking on the “Ask a Question” tab.